Update on HoG-Funded Research for a Cure 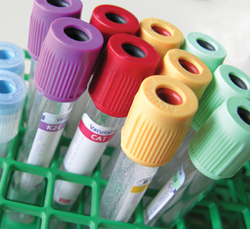 Since July 2012, Hemophilia of Georgia has contributed almost $3 million to St. Jude Children’s Research Hospital in Memphis, Tennessee, to support gene therapy clinical trials to cure hemophilia B (factor IX deficiency). The St. Jude researchers, in association with their colleagues at University College London, recently published their results in The New England Journal of Medicine. In an accompanying press release, the researchers reported that the gene therapy has transformed life for men with severe hemophilia B by providing a safe, reliable source of the blood clotting protein Factor IX that has allowed some to adopt a more active lifestyle.

In this study, participants received one of three doses of gene therapy that used a modified adeno-associated virus (AAV) 8 as the vector to deliver the genetic material for making Factor IX. The vector was administered as a single infusion into a vein in the arm of each participant.

Factor IX levels rose in all 10 men with severe hemophilia B following gene therapy and have remained stable for more than four years. Overall, episodes of spontaneous bleeding declined 90 percent. Use of Factor IX replacement therapy dropped about 92 percent in the first 12 months after the treatment with the investigational therapy.

In the six participants who received the highest gene therapy dose, levels of the blood-clotting protein increased from less than 1 percent of normal levels to 5 percent or more. The increase transformed their disease from severe to mild and enabled participation in sports such as soccer without the need for Factor IX replacement therapy or an increase in the risk of bleeding. Episodes of spontaneous bleeding and use of Factor IX replacement therapy declined for these patients more than 94 percent in the next 12 months.

Liver enzymes rose in four of the six patients who received the highest dose, possibly due to an immune response against the vector. The men had no symptoms and remained otherwise healthy. Their liver enzymes returned to the normal range following brief treatment with steroids.

“This study provides the first clear demonstration of the long-term safety and efficacy of gene therapy,” said senior author Andrew Davidoff, M.D., chair of the St. Jude Department of Surgery. “The results so far have made a profound difference in the lives of study participants by dramatically reducing their risk of bleeding.”

The paper’s first and corresponding author, Amit Nathwani, M.D., Ph.D., added: “The data we are reporting mark a paradigm shift in treatment of hemophilia B and lay the groundwork for curing this major bleeding disorder.” Nathwani is a faculty member at the UCL Cancer Institute, Royal Free Hospital and NHS Blood and Transplant. “The results also provide a solid platform for developing this gene transfer approach for treatment of other disorders ranging from other congenital clotting deficiencies like hemophilia A to inborn errors of metabolism such as phenylketonuria.”

Since joining the trial, four of the seven men ended the routine Factor IX injections. None have suffered spontaneous bleeding despite increased physical activity. “Some patients have not required clotting factor injections for more than four years, which has been life changing,” Nathwani said. Researchers estimated that overall spending on Factor IX replacement therapy for study participants is down more than $2.5 million.

Factor IX is normally produced by liver cells. AAV8 was selected for the vector because the virus infects liver cells but does not cause disease in humans or integrate into human DNA. This study was restricted to patients not previously infected with AAV8 to eliminate the need for immune-suppressing drugs to protect the vector from possible immune system attack.

Twelve men have now joined the on-going Phase I/II safety and efficacy trial. Half were treated at UCL and half at St. Jude. Discussions are underway about expanding the trial to include younger patients with hemophilia B. Meanwhile work continues to improve and expand use of the vector for treatment of hemophilia A, another more common bleeding disorder.