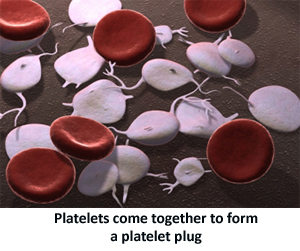 Von Willebrand Disease (VWD), is believed to be the most common bleeding disorder.  To make it easier to say, most people call the disorder by the initials, V-W-D.  Up to one in every hundred people has VWD.

Von Willebrand Disease is named for the doctor who first described seeing it in a patient. The doctor’s name was Erik von Willebrand.  He was a physician in Finland who wrote about VWD in 1926.  He treated a family of patients who bled for a long time from cuts and other injuries and often had severe nosebleeds.  Many of the women in the family had very heavy bleeding during their monthly periods, which lasted longer than normal.  Several of the family members had bled to death.  Because both women and men in the family had severe bleeding, Dr. von Willebrand knew that it was not hemophilia.  If it was hemophilia, only the men would have severe bleeding.

Today we know that VWD is caused by a problem with one of the proteins in the blood, von Willebrand factor (VWF).  People with VWD either don’t have enough von Willebrand factor (VWF) or what they have does not work right.  VWF plays two important roles in blood clotting.  VWF is the protein that makes platelets stick to the wall of an injured blood vessel and to each other.  Without it, a platelet plug cannot be made.  VWF is also a carrier protein for one of the clotting factors, factor VIII.  This means that it helps make sure that there is enough factor VIII in the blood and it helps get the factor VIII to where it is needed.  Without VWF, factor VIII will be broken down in the bloodstream and there may not be enough to stop bleeding.

Von Willebrand factor is stored in the endothelial cells that line the blood vessels.  Only about one third of the body’s VWF is floating in the bloodstream.  The rest is in storage. As described in the section on Understanding How Blood Works, when a blood vessel is damaged, platelets move to the spot to plug the hole.  Von Willebrand factor is what allows the platelets to stick to the blood vessel wall and to each other.  In a person with VWD, the platelets can't stick together enough to make a good platelet plug.  The bleeding will last longer.

Like hemophilia, VWD is passed on through the genes from parent to child.  But unlike hemophilia, men and women have an equal chance of getting VWD. It is possible for a person to have both von Willebrand Disease and hemophilia.

Unlike hemophilia, people with VWD rarely bleed into their joints. Less than 8% of patients report joint bleeding.  VWD is more likely to cause easy bruising and nosebleeds. Women with VWD can have very heavy menstrual periods.

There are several tests to check for von Willebrand Disease.  Because it is usually passed down through families, it is important that all family members be checked.  Hemophilia treatment centers (HTCs) take care of people with VWD and can provide testing.  The hemophilia doctor should help the person with VWD plan for any surgery.  If not treated correctly, the person with VWD can have serious bleeding after major surgery.  A person with VWD should also call the HTC if she or he has unexplained bleeding or an accident.