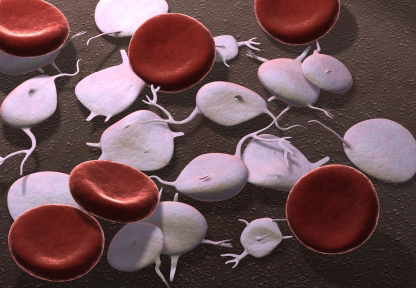 Bernard-Soulier Syndrome (BSS) is a very rare platelet disorder.  Fewer than one person in a million has it.  Like the other bleeding disorders in The Handbook, people are born with it and it affects both men and women.

Bernard-Soulier Syndrome (BSS) is named for the two French hematologists who first described it in 1948, Jean Bernard and Jean Pierre Soulier.  Another less common name for BSS is “Giant Platelet Syndrome.”

In normal blood clotting, platelets go through a process of adhesion.  Von Willebrand factor (VWF) acts as a glue to stick platelets to tears in blood vessels.  VWF sticks to certain places on the surface of the platelet.  These places are called receptors.  One of these receptors is called glycoprotein Ib/IX.   It is sometimes written GPIb/IX. The platelets of people with BSS do not have enough glycoprotein Ib/IX.  Von Willebrand factor (VWF) doesn’t have places to stick to on the person’s platelets.  It can’t glue the platelets to the tear in the blood vessel and a platelet plug can’t be formed.

People with BSS have the usual symptoms of a platelet disorder which range from mild to severe.  Laboratory tests are necessary to diagnose BSS.