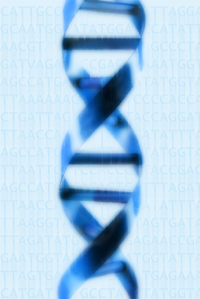 The bleeding disorders discussed in The Hemophilia, von Willebrand Disease and Platelet Disorders Handbook are congenital.  That means they are present from birth.  They are also hereditary.  This means they are passed down from parent and child through the genes.  In some of the disorders, only one parent has to have the gene in order to pass the disorder to the child.  In others, both parents must have the gene.  This chapter explains how genes are passed down to children.

The science that studies how a disease is inherited is called genetics. Genetics can be very hard to understand.  People dealing with an inherited bleeding disorder may need more explanation than is given here.  The doctors, nurses, and genetic counselors at the Hemophilia Treatment Center can answer other questions.

Another purpose of genetic counseling is to help a family know which members might be carriers of a bleeding disorder.  They can be offered testing and counseling before they have children of their own.