Bleeding During and After Pregnancy 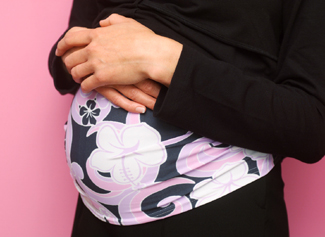 For women with Type 1 and Type 2 VWD, the level of VWF and factor VIII in their blood rises during pregnancy.  This increase starts about the tenth week.  The rise in factor levels is highest in the last few months of the pregnancy (the third trimester).  The amount of increase is different for each woman.  That is why it is important to watch for bleeding during the pregnancy and after the baby is born.

Because they lack VWF, women with Type 3 VWD will not have this increase in factor levels.  They are more likely to bleed during and after the baby’s birth.

Though it is not approved for use during pregnancy, some doctors will use desmopressin to control bleeding during childbirth and after the baby is born.  If this is done, the mother’s sodium level must be followed very closely.  Women with Type 2 and Type 3 VWD may need to use factor concentrate to control bleeding.
It is important to watch for bleeding in a woman after her baby is born, especially during the first five days.  Bleeding can also start one to two weeks afterwards.  This is because the factor levels that rose during pregnancy have gone back down.

If a woman with VWD or a platelet disorder thinks she is having a miscarriage, she should call her doctor immediately.  She could begin to bleed heavily.