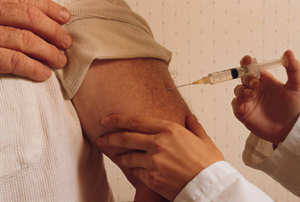 People with hemophilia need to take precautions before they get shots into muscles.  You won't often need to get this kind of shot.  When you do, you have to take factor first.  After the shot, press down firmly for several minutes where the needle went in.  This will lessen any bleeding.

Before someone gives you a shot, ask if it is into the muscle.  Remind the person that you have hemophilia.  Ask if there is another way you can take the medicine or the vaccine.

Many medicines and vaccines can be given in a shot underneath the skin but not in the muscle.  This is called a subcutaneous injection. (Nurses and doctors just say “sub-q”.)  There is less bleeding when the needle does not go into the muscle.

After any kind of shot, press down firmly where the needle went in.  Hold it for several minutes to stop the bleeding.  You can then tape a band-aid firmly over the site.  If the place where you got the shot starts to swell, you may need to take factor.  Hold an ice pack on the swollen area.

It is important for children with hemophilia to get all of their immunizations (vaccines to prevent disease).

Immunizations are shots to prevent disease.  We get most of our immunizations before we are two years old.  That way, the vaccine can protect us the most.

Most children with hemophilia can take all of their shots.  The immunizations will protect them from diseases such as polio, whooping cough, and tetanus.

Children with hemophilia usually get their shots just below the skin instead of into a muscle.  You have to press down where the needle went in for five minutes after the shot.

Sometimes a baby or child will be fussy or have a fever after an immunization.  Tylenol® (acetaminophen) may make him feel better.  Call your doctor if the child does not get better.