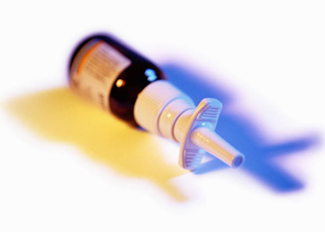 Desmopressin acetate is a drug that causes VWF that is stored in the lining of blood vessels to be released into the bloodstream.  This can help some people with von Willebrand Disease and some platelet disorders.  The rise in VWF in the blood can help raise the amount of factor VIII, it may also help some people with mild hemophilia.  Desmopressin is not made from blood and carries no risk of viruses.  In the United States, it is given in two ways.  One way is to inject the drug into the body.  The brand name of this type of desmopressin is DDAVP®.

The other way desmopressin is given is by a nasal spray (spraying it in the nose).  The brand name is Stimate® Nasal Spray.  Stimate® is easy to use.  The nurse in the hemophilia treatment center (HTC) teaches people how to use Stimate® correctly.  People can carry the nasal spray wherever they go and use it whenever they need it.  However, there are some side effects to desmopressin.  These include headache, changes in blood pressure, and feeling flushed in the face.  The drug also makes you retain water.  If you drink too much liquid after taking desmopressin, the amount of sodium (salt) in your body can go too low.  This can make you have a seizure or go into a coma.  For this reason, people taking desmopressin are told to limit the amount of liquids they drink.

Before a person with a bleeding disorder begins using desmopressin, a trial dose is given and the levels of VWF and factor VIII are measured.  If the desmopressin is effective, there is usually a two  to five fold increase in the amount of factor VIII and VWF in the blood.  The level begins to drop again after about eight hours.  If a person has to use desmopressin again within 48 hours, the second dose may not work as well.

Because the VWF they have does not work right, people with Type 2B VWD should not use desmopressin.  It will cause their bodies to release more of the defective VWF into their bloodstreams.  It will bind to their platelets and can cause blood clots or a decrease in the number of platelets.  It also does not work in Type 3 VWD, since these people have no VWF stored up that can be released.

Desmopressin may or may not work in people with Type 2A VWD.  In Type 2A, the VWF has the wrong size multimers.  Using desmopressin to release more of the defective VWF into the bloodstream may not help make a platelet plug.  A person with Type 2A should be tested with desmopressin before it is used to treat bleeding.