Cryoprecipitate and Other Blood Products

Whenever we use products made from the blood of other people, we run the risk of getting any viruses that these people may have.  People who donate or sell their blood are asked about their lifestyles and health records.  The ones whose answers suggest that they might have a virus or other illness are not allowed to give their blood.  The blood itself is tested for hepatitis viruses and HIV.  These steps keep our blood supply as safe as possible from disease.  Also, factor concentrates are now treated to remove or kill viruses.  To further reduce the risk of getting a hepatitis virus, people with bleeding disorders should be vaccinated against hepatitis A and B. 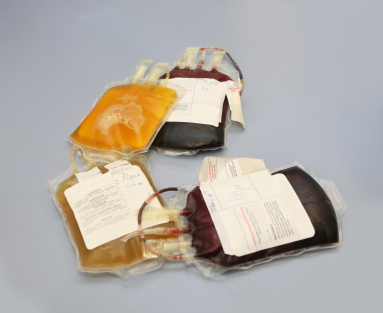 When frozen plasma is slowly thawed, it separates into layers.  The bottom layer is loaded with clotting factors, including VWF.  This factor rich plasma is called “cryoprecipitate” or just “cryo.”  It is stored in bags which are frozen until needed for treatment.

Although blood donors are screened for hepatitis and HIV, cryo is not treated to destroy viruses.  This is one of the reasons cryo is not a preferred treatment for bleeding disorders in the U.S.

People who have to use cryo regularly can talk with their doctors about setting up a known donor pool.  This is a group of people at low risk of having a virus who will agree to donate plasma for the patient.  The donors give plasma through a process called plasmapheresis.  This is similar to donating whole blood except that the blood cells are removed from the plasma and then put back into the donor.  Since the body can quickly make more plasma, donors can have plasmapheresis more often than they can donate whole blood.

Plasma, the fluid portion of the blood, can be frozen until needed.  Even though fresh frozen plasma contains clotting factors, it is rarely used to bleeding disorders.  There is a chance that it will contain a virus.  Treatment would also require a large amount of plasma to be given in order to get enough clotting factors.  This risks overloading the person’s circulatory system (heart, arteries, and veins).

Some people with platelet disorders have to be given platelets from blood donors.  Their immune systems may react to these donated platelets as foreign cells.  The immune system may make antibodies that will destroy the platelets.  To help prevent this, people with platelet disorders should get platelets that have been filtered to remove white blood cells (leukocytes).  Using donated platelets that have been HLA matched to the person receiving them is another way to keep antibodies from forming.  HLA matching is a way of testing a blood donor’s platelets.  It is used to identify a donor whose platelets are most compatible with the blood of the person who will get the platelets.  However, in an emergency, there is usually not enough time to get HLA-matched platelets.

Whole blood is rarely used to treat bleeding disorders.  Since a bag of whole blood only has a small amount of clotting factors, many bags of blood would be needed to stop bleeding.  There is a danger of overloading the circulatory system.  Whole blood may be used if the person has lost a large amount of blood and needs to replace other blood parts such as red cells.