Cells are the tiny, living building blocks of your body.  Every living part of you - your muscles, skin, blood, nerves, bones, and organs - is made up of living cells. New cells are made when the old cells divide in two.  Every human being starts as one cell, the cell formed when a woman's egg is fertilized by a man's sperm.

Chromosomes are tiny rod shapes inside each cell of the body.  There are 23 pairs of chromosomes (46 total) in each cell.  Almost all the cells in your body have 46 chromosomes.  There are two types of cells that are different.  These are the eggs in a woman and the sperm in a man.  They only have 23 chromosomes each. 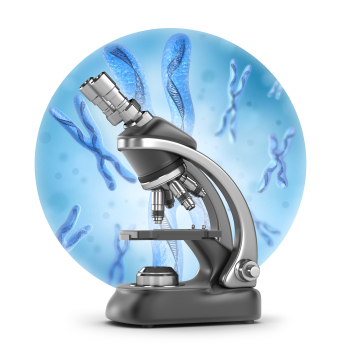 When a woman becomes pregnant, her egg joins with the father's sperm to make a new cell.  This cell will grow and divide into a baby.  This first cell has 46 chromosomes, 23 from the mother and 23 from the father.  All the instructions for how the child will grow are in the genes on these chromosomes.  Each cell of the body will contain exact copies of the 23 pairs of chromosomes that were in the first cell that was formed by the egg and sperm.

The chromosomes contain your genes

Genes are the blueprints for your body.  They are the instructions for building new cells.  They tell what color hair and eyes you will have.  They tell what diseases you might be likely to get.  Genes tell the body's cells how to make factor.  There are tens of thousands of genes arranged along the chromosomes. All of the genes are the same in each cell and they are all arranged the same way.

What makes a baby a boy or girl?

Figure 2-2. How the sex of a baby is set.  One sex chromosome comes from each parent.  Follow the arrows to see the possible match-ups. 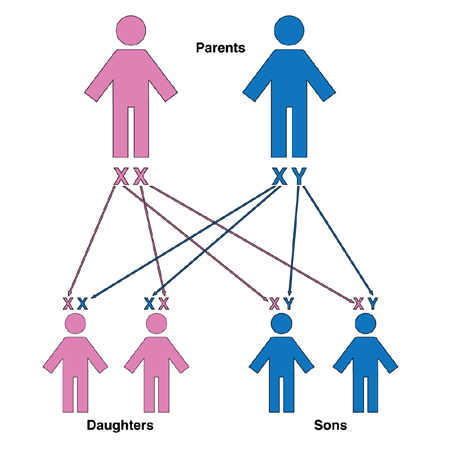 If a gene is faulty, there will be a problem with the part of the body it directs.  This is called a genetic defect. There is a gene that tells certain cells in the body how to make clotting factor.  There are also genes that tell how to make von Willebrand factor (VWF) and how to make each part of a platelet.  If there are problems with any of those genes, the factor or platelets that are made may not work right.  There may not be enough factor made.  The person will have a bleeding disorder.  What type the person has depends on which gene has the defect.

Sometimes one of the genes in the pair is stronger and blocks the instructions from the other gene.  The stronger gene that takes control is said to be dominant.  The gene whose instructions are blocked is called
recessive.  A recessive gene will have a chance to send its instructions to the cells only if it is paired with another recessive gene.

For each gene pair, a child can inherit two dominant genes, two recessive genes, or one dominant and one recessive gene.  Which kind of genes he or she gets from the parent is decided by chance.