More than 140 people including staff and volunteers enjoyed Family Camp at Camp Twin Lakes September 25-27, 2009.  Families arrived on Friday evening and were greeted by volunteers and staff to assist with luggage and check-in.  After dinner, students from the University of Georgia led the families in some icebreakers. 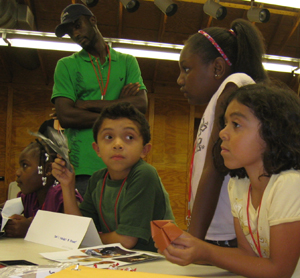 Next, we went on a “Journey Around the World.”  Families were separated into 6 groups (red, orange, yellow, green, blue, purple) and handed a boarding pass and a passport.  Each group’s first destination was printed on their boarding pass.  Destinations included Botswana, France, Japan, Mexico, Nepal, Peru, Russia, and Egypt.  Once the families had their passport stamped by each country the group returned to the gym to talk about the activity with the rest of the groups.

Journey Around the World is designed as a trip that introduces families to the type of bleeding disorder care that people from around the world receive.  The goal is to raise awareness of the needs of people with a bleeding disorder in developing countries.  This program was developed by the World Federation of Hemophilia organization. During their journey to each country the families had a small and easy project to complete before the group could move on to the next country.  The groups stopped in the dining hall for their in-flight snack as they made the tour of countries.  The families seemed to enjoy their Journey Around the World and went off to sleep with sweet dreams and a sense of thankfulness that if they had to have a bleeding disorder, at least it was in the US where we have HoG and HTCs to help them.

On Saturday morning the families were divided into age groups for educational sessions.  The Adult Group attended the Advocacy session led by HoG’s Director of Training, Research and Advocacy Jeff Cornett.  The adults left with a sense of passion and a “call to action” as a result of that session.

The 11-17 year olds went in the Gym to play “Life-size Game of Life.”  Shannon Veronesi, HoG’s Health Educator, designed this game.  Carpet tiles were donated by Great American Flooring to be used as the game board.  We built game pieces that looked like people and buildings to represent each station in the game.  Participants were divided into color teams.  Each team started by either going to college or straight into a career.  Each team would go through the game, earn paychecks, get married, have children, and end the game in retirement.  Along the way, they might get in a car accident (this required a stop at the Hemophilia Treatment Center), earn LIFE tiles by owning a gym membership which required a stop at the Gym to work out, and visit the insurance company where they had to pick a policy. 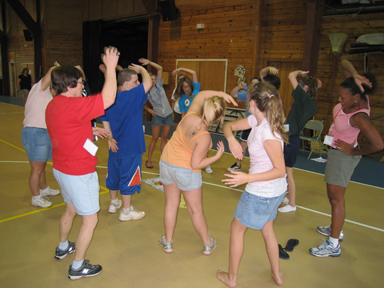 All throughout the game, the banker at the bank kept track of their loans, debt, monies earned, and assets earned throughout the game.  At the end of the game, the winning team was the doctor who retired with over $1,000,000 and a sailboat.  The goal of the game was to help this age group develop the skills needed to live successfully, with or without a bleeding disorder.  The group had a lively discussion about their “life” experience after the game ended.

The younger groups enjoyed playing games with volunteers and staff, or drumming in the new Tree House.  The families came back together to play the Fitness Game which is a life-size board game relay.  With every roll of the dice, each team had to complete a series of exercises or answer questions about bleeding disorders.  Everyone went into lunch from there.  Lunch followed the game.

Afternoon activities included paddle boats, archery, biking, fishing, arts & crafts, tennis, mini golf, cooking, and the pool.  The most popular activities were paddle boats, cooking and archery.  The families loved spending the afternoon together and enjoyed the activities offered.  There are two girls who now know how to ride a bike, and several families learned how to play tennis from our resident pro, Danny.  The families who chose to go to arts & crafts really enjoyed designing their own family memo boards to organize all of the family schedules.  Cooking was as popular as ever - each session made a different delicious recipe.

After dinner, staff hosted an ice cream social and family game night.  There was ice cream, chocolate and caramel syrup, marshmallows, M&Ms, sprinkles, cherries, and whipped cream for topping.  Yum!  After the ice cream social, we moved into the Media Center for family game night.  There were all kinds of board games and card games set up and bingo was set up in the Media Center kitchen with prizes. The families loved the relaxed atmosphere to be able to mingle and play games together.

On Sunday morning, everyone had breakfast together and then met in the Gym for “Live the Adventure.” The families were again divided into their color teams.  Each team received an envelope that included a map with the numbered stations, and instructions regarding where their team should start.  HoG staff members set up ten stations around camp.  Families learned something different at each station, from treating bleeds, to preparing for a disaster.  Each family left Family Camp with a disaster preparedness backpack provided by the National Hemophilia Foundation.

We ended the weekend with a raffle drawing.  Families earned raffle tickets by participating in the educational sessions and for completing the weekend evaluation.  Prizes included “Find a Cure” car magnets, leftover camp t-shirts, a brick on the Wannaklot Walk, and a disaster preparedness bag that also included an emergency blanket and first aid kit.

The families, staff and volunteers thoroughly enjoyed the fun and informative weekend.  Families shared that they always have a great time and enjoy meeting and sharing with other families.  They learned about bleeding disorders and spent quality family time together.  This was an amazing collection of families because of the way they reached out in the spirit of support and fellowship.