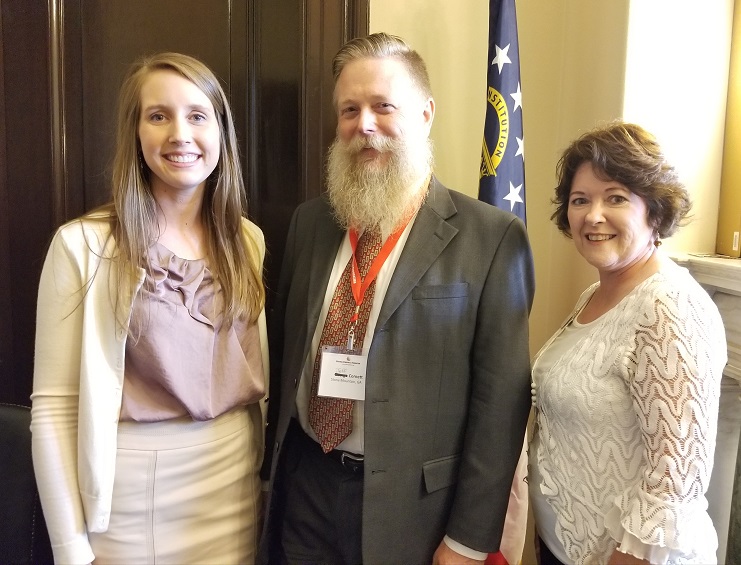 With the James Comey hearing, the nation’s attention was turned to the U.S. Senate on June 9, 2017, but bleeding disorder leaders were in Washington that day to ask senators to focus on another important issue: safeguarding our access to quality, affordable health insurance. Maria Manahan, HoG’s CEO, and Jeff Cornett, Vice President of Research and Public Policy, joined National Hemophilia Foundation chapters from other states in visiting key senators to talk about senate Republicans’ plan to “repeal and replace Obamacare.”

Under the Affordable Care Act (“Obamacare”), health insurance plans must cover essential health benefits such as preventive care and prescription drugs. Plans cannot impose lifetime or annual caps on these benefits. Some Republicans have proposed allowing states to apply for a waiver to drop categories of care from these essential health benefits. For example, a state could ask for a waiver to no longer count pharmacy services as an essential health benefit. This would allow a health insurer to reinstate a lifetime or annual cap on factor purchases. This is unacceptable to the bleeding disorder community, which fought long and hard to abolish these caps. Other proposals opposed by the bleeding disorder community would allow people with bleeding disorders to be charged more for health insurance or would place them in high-risk pools, which have been repeatedly shown to be unworkable. Of special concern to people in Georgia are proposals that would cap the amount of money our state receives from the federal government for Medicaid. Georgia pays less per Medicaid patient than almost any other state. If the federal payment is capped at the current level, it would punish our state for being frugal and would most assuredly lead to deep cuts in our Medicaid program. Senate Republicans have said they may release a bill and vote on it as early as July. Hemophilia of Georgia will continue to closely follow this legislation.