Learning to Swim at Camp Wannaklot

It's early morning – 6:45 a.m. – and most of camp is still in bed. But five 7-year-old campers are on a mission. They are waiting at the pool gate for “Polar Bear” – voluntary swim lessons offered each morning before breakfast. They want to trade in their orange “nonswimmer” wrist bands for the glowing green ones that signify they can go in the deep end of the pool. They are soon joined by two 11-year-olds, one of whom already has his green band. He wants to learn to swim better: “I'm like a torpedo underwater but I’m like a turtle on top.” 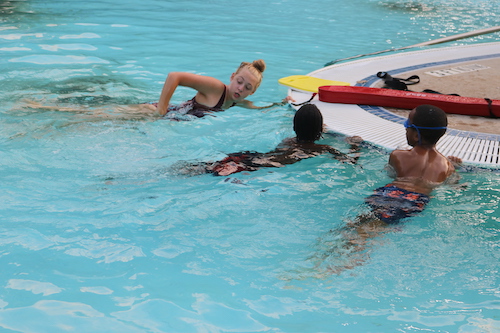 Two lifeguards from Camp Twin Lakes open the gate and lead the campers to the pool’s edge. This is the second summer working at Camp Twin Lakes for both Savita and Annalise, and their skill at making campers feel at ease and confident in the water shows quickly. A camper sticks a foot in the pool and proclaims, “It's hot!” Savita agrees that it’s warm, but it feels good. The name “Polar Bear” has stuck even though the morning air is not cold, and fountains are needed to help cool the saline water of the pool. Savita takes the 7-year-old campers to one side of the pool and Annalise leads the two older ones to the opposite side. 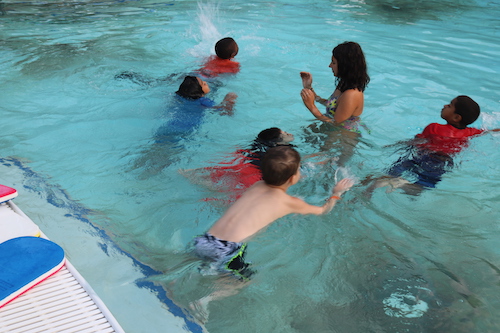 “There are two ways you can start to swim,” says Savita. “You can separate the water with your arms like this or you can scoop the water … "

“Or you can doggie paddle!” shouts a camper. 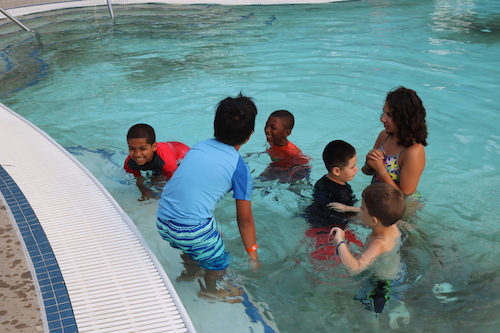 "We're not going to doggie paddle – we're going to swim,” Savita replies. She begins by having them put their heads underwater and blow bubbles. It’s clear that comfort in the water varies among the five. Two are hesitant to hold their heads down for long while one is already demonstrating the backstroke. He’s obviously had some prior instruction in swimming and yet didn't pass his skill check on Sunday. That's not unusual. 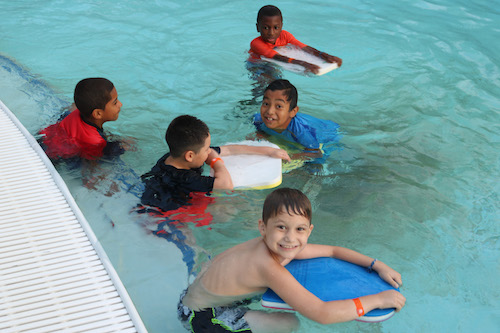 When Camp Twin Lakes opened in the early 90s, campers began their week with a “swim test.” Then someone realized that taking anxious children, in a new environment surrounded by strangers, putting them in bathing suits and having them take a “test” in front of everyone was really the wrong approach. Now campers have a “swim check” or “skills check” with a small group of their cabin mates. It’s purposefully kept low-key, low anxiety. Those who can swim from one side of the pool to the opposite ladder without putting their feet on the bottom get a green band. Those who can’t, get an orange one. An orange band still allows you access to most of the pool, including the slide. Campers with green bands can swim in the deepest part of the pool.  If a camper doesn't get a green band on Sunday, she or he can try again during free swim periods or during Polar Bear.

Annalise talks to the two 11-year-olds about their goals. They’ve grasped the basic concepts but want to practice the proper form for their arms and legs. She demonstrates the strokes and gives them one-on-one instruction. She balances it with time for fun and splashing, letting them take breaks. Before the hour is over, the 11-year-old with the orange band wants to try the skill check again. He makes it halfway, with great form, but then stops and stands in the water. Annalise asked him why he stopped there.

“That happens when you are swimming. Let me show you what to do.” She demonstrates how to turn on your back and slow your strokes. She helps him learn to float so he can rest a moment. The skills check is not a race. Campers can go at their own pace. He'll try again tomorrow.

Meanwhile, the 7-year-olds have come a long way in 30 minutes. They are very comfortable with their heads underwater. They’ve learned how to move their arms and kick their feet. Savita challenges them to combine what they have learned. As a splashing mass of 7-year-olds moves across the pool, she yells, “You’ve got to do it both together – arms and legs … there you go! You got it!” 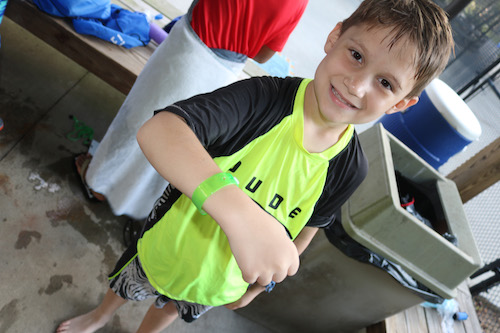 It's enough for the first day. She lets them finish the session splashing and zooming down the slide. Levi, the backstroke demonstrator, wants to try the skill check and easily swims to the ladder. With a snip of the scissors, his orange band is replaced with a green one. And it’s accompanied by a big smile.