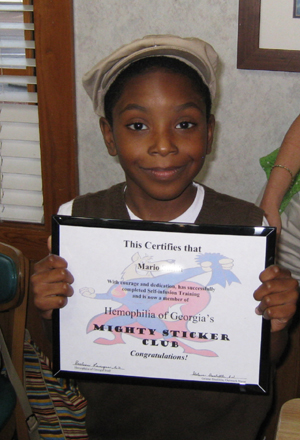 On April 27th, 9-year-old Mario S. received his Mighty Sticker Award at the Savannah Client Dinner. His parents, aunt and uncle were on hand to witness this memorable event along with other members of the bleeding disorders community in Savannah. Mario has come a long way in his 9 short years. It wasn’t that long ago when he was earning stickers and small prizes when he held still for his aunt to access his port.

The transition to venipunctures presented new challenges to Mario as he learned to cooperate with this new form of access for his prophylaxis treatments. It wasn’t long before he began mixing factor and was helping to get his supplies ready. Last summer, his first year at Camp Wannaklot, he watched others infuse themselves. Mario said that it didn’t look that hard and wanted to try it. He has been infusing himself ever since.

The staff at Backus Children’s Hospital HTC along with HoG congratulates Mario in his achievement. No wonder Mario was one of the 2007 Children’s Miracle Network “Miracle Kids.”