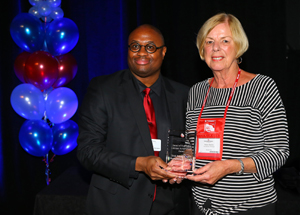 On September 20, 2014, Trish Dominic, Hemophilia of Georgia’s CEO, received the Lifetime Achievement Award from the National Hemophilia Foundation (NHF) at its Annual Meeting in Washington, D.C. This award recognizes an individual who has dedicated his or her life to improving the lives of those affected by bleeding disorders. The award coincided with Trish’s 30th employment anniversary at HoG.

Trish Dominic was born in Shamokin, Pennsylvania. She entered the bleeding disorders community in 1976, when she answered an ad in the newspaper. The Delaware Valley Chapter of the NHF was seeking a Field Representative.  A Field Representative worked from September to May organizing fundraising events with hemophilia families and volunteers in each county. Trish started a fashion show and an Oktoberfest event. Since it was the 1970s, “a-thon” fundraisers were very popular and Trish was charged with establishing every type of “a-thon” she could dream up. She convinced schools and colleges to hold volleyball-a-thons and basketball-a-thons. She also spoke to local civic organizations, such as the Lions Club and Rotary, about hemophilia.

Due to the success of her efforts, Trish became the chapter’s Director of Volunteers in 1977. She was now working year-round with all the counties surrounding Philadelphia and southern New Jersey. Her hard work, dedication and commitment to the Delaware Valley Chapter led to her becoming its Executive Director just three years later. Not only was she leading the chapter, but she still had all of the responsibilities of her former position! One of her accomplishments was taking the chapter’s fundraising to a higher level by hosting a testimonial dinner honoring a local official such as a bank or hospital president, which raised almost $200,000. Trish greatly valued the knowledge and experience she gained working with volunteers and the board of directors.

In 1983, Trish’s husband was transferred to Atlanta and she briefly left the bleeding disorders community. Even though she quickly found a corporate job, she still wanted to work to improve the lives of those with hemophilia. She met with the leaders of the Georgia Chapter of the NHF to offer her advice and guidance. She realized that hemophilia care in Georgia was far behind what she had experienced in Philadelphia. Trish was able to create a vision for the Georgia volunteers of what hemophilia treatment could and should be. She had the support of Karen Meredith, a consultant to Hemophilia of Georgia who had been a nurse at an HTC in Wisconsin. (The reluctance of the Georgia legislature to give funding to the local chapter of a nonprofit based in New York City led to the creation of two hemophilia organizations – the Georgia Chapter of the NHF and Hemophilia of Georgia – which shared a building, volunteers, and just about everything else.) The Georgia Chapter board of directors knew they had found a jewel and hired Trish as their Executive Director in 1984. Looking back, Trish says she originally only planned to stay a couple of years, just until hemophilia treatment centers were established for the state, but “there was always more to do and some new challenge that inspired me to stay.” She adds, “I love the opportunity to make something new happen!”

Trish’s vision has not been limited to just the state or the region. In 1996, the World Federation of Hemophilia (WFH) began “Operation Access” in Chile, a program designed to make factor concentrate available where it was previously unattainable. The WFH asked Hemophilia of Georgia to work with the Chilean hemophilia organization to educate its members and to help them advocate before the Chilean government. This relationship was formalized into a twinning partnership. Since then, Hemophilia of Georgia has twinned with Honduras and is now in its third year of twinning with Bolivia.  In 2007, the WFH named the Honduran Hemophilia Society and Hemophilia of Georgia its “Hemophilia Organization Twins of the Year.” When Trish learned how much the WFH was paying to ship donated factor concentrate around the world, she used Hemophilia of Georgia’s influence to negotiate a much lower rate. She then offered the services of HoG’s pharmacy to store and distribute the factor – free of charge. In 2010, the WFH presented HoG with the International Outstanding Service Award for being “constant and outstanding” in overcoming the obstacles of shipping factor to those who need it the most. In 2013 alone, Hemophilia of Georgia voluntarily shipped 18 million units of factor to 43 countries. Trish has served on the Board of Directors of the WFH USA since 2006. In 2012, she joined the WFH’s Fund & Resource Development Committee and became a Close the Gap Campaign Regional Co-Chair.

In order for hemophilia pharmacies to work cooperatively and have a greater voice, Trish helped establish the Hemophilia Alliance. Trish served on its board from 2001 to 2009, including a term as President from 2001 to 2005. In 2004, the Hemophilia Alliance established a group purchasing organization, a vision that Trish pursued for many years with the Alliance membership. Trish served on the Board of the Group Purchasing Organization from 2004 to 2009. The purpose of the group purchasing organization was to decrease the cost of factor concentrate and to establish administrative fees that could fund staff and programs at NHF chapters, treatment centers and MCHB/CDC regions. In 2014, the Alliance Foundation gave $900,000 to chapters, treatment centers and regions in the U.S., for a total of $3.3 million in awards since 2009.

In 2002, after talking with Dr. Bruce Evatt at the CDC, Trish became increasingly concerned that the future of specialized care at HTCs was in jeopardy because sufficient numbers of new hematologists were not specializing in hemostasis. In response, HoG began offering Hemophilia Clinical Scientist Development Grants, designed to give new physician researchers up to five years of funding to progress to the level of an independent investigator. To date, the agency has funded 11 physicians, many of whom have gone on to assume leadership positions at an HTC.  Hemophilia of Georgia has been a longtime funder of the NHF Judith Graham Pool Postdoctoral Research Fellowships and Trish has repeatedly challenged other NHF chapters to support this program.  As gene therapy research began to offer real hope for a cure for hemophilia, Trish again called for Hemophilia of Georgia to take the lead. In 2012, the agency committed nearly $6 million to fund gene therapy clinical trials.

One of the hindrances to bleeding disorder research has been the absence of a secure national database of patient information. In 2006, Trish was one of the driving forces behind the creation of the American Thrombosis and Hemostasis Network (ATHN), a nonprofit organization to create and provide stewardship for such a database. Trish has served on the ATHN board of directors since its founding and is presently the organization’s treasurer.

The Lifetime Achievement Award was not Trish’s first award from the NHF.  In 1991, she received the NHF Outstanding Staff Recognition Award. The qualities that earned her that award were recognized by HoG’s staff when they honored her at a 30th anniversary luncheon on September 12, 2014.  Staff members spoke of Trish’s perseverance, integrity, and vision in making HoG what it is today. Praise came from throughout the bleeding disorders community. Fran Haynes, Executive Director of the Hemophilia Foundation of Greater Florida, wrote, “She has led by being among the finest examples of a true professional in the nonprofit arena. She has served as an extraordinary role model to colleagues as well as the HoG staff. . . . There are many experienced Executive Directors and Chief Executive Officers in the bleeding disorders community like me who have had our careers supported by Trish. She is a wise counselor, a standard bearer of integrity and civility, and is as highly respected as anyone in this field.”