By Victor McCarty, Director of Development

In partnership with the Atlanta Braves, Hemophilia of Georgia will host the annual Hit 'Em for Hemophilia Golf Tournament on Tuesday, November 1, 2011 at Chateau Élan Winery and Resort in Braselton, Georgia to raise money for bleeding disorders research.  More than 240 participants are expected, including current and former Atlanta Braves coaches, players and executives and representatives from more than thirty corporate sponsors.

Registration begins at 9 a.m. followed by a shotgun start at 10:30 a.m.  The reception immediately following the tournament features silent and live auctions.  All participants will have the opportunity to bid on many exceptional items including: 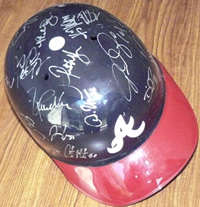 There are still limited slots available for organizations to sponsor a foursome.  Individual slots are also available for people interested in participating.  The registration deadline is Tuesday, October 25, 2011.  Contact Vic McCarty at vamccarty@hog.org or call 770-518-8272 ext. 213 if you’d like to register.  Special thanks to the volunteers who have served on the planning committee and a big thank you in advance to the volunteers who will be with us again this year.