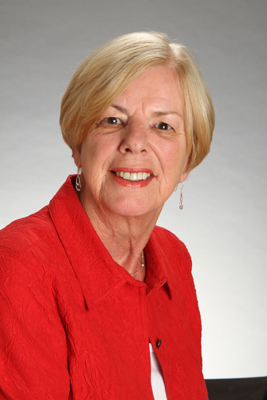 Hemophilia of Georgia is proud to announce the endowment of the Patricia Dominic Fellowship Fund at Emory University. What does this mean? It means that not only are we able to honor Patricia “Trish” Dominic who was HoG’s highly respected previous CEO, but also we are providing funding to help train bleeding disorder specialists to care for patients for years to come.

Before her retirement earlier this year, Trish worked tirelessly for over thirty years to improve the lives of people with bleeding disorders. In addition to leading HoG’s growth into a statewide agency providing stellar programs and services, she helped initiate national organizations, including the Hemophilia Alliance to represent hemophilia pharmacies and The American Thrombosis and Hemostasis Network (ATHN) to collect and house national data. She led HoG’s fundraising efforts to raise money to fund physician researchers who continue to search for a cure for hemophilia. In September, 2014, Trish received the National Hemophilia Foundation Lifetime Achievement Award. Please read more about her achievements and contributions to the bleeding disorder community here.

“Endowing a fund” means that HoG has given Emory University a substantial amount of money which will be invested. After the principal is invested, the interest earned on the investment will be used for Emory’s fellowship program in the hematology department. This is an excellent way to ensure that the program, in contrast to some programs that are funded a year at a time, will last forever. At Hemophilia of Georgia, we want our gifts to continue into the future.

Emory’s fellowship program is a three-year training period which prepares individuals (“fellows”) for board eligibility in particular fields or specialties. During the three years, the individual spends time in clinical rotations as well as research. The individual also has the opportunity to present at national meetings and write peer-reviewed publications. The specialized training and intensive mentoring prepare the fellow for an academic career in a chosen field.

By endowing a fellow in Emory’s Department of Hematology and Medical Oncology, HoG is ensuring that Emory will be able to recruit talented physicians to train in bleeding disorders. In addition to funding the support of the fellows, the Patricia Dominic Fellowship Fund will be used to bring national and international leaders in the bleeding disorder community to Emory to lecture and participate in Grand Rounds. Grand Rounds are meetings or presentations about the medical issues and treatment of particular patients and are attended by doctors, residents and medical students. This will enhance the education of hundreds of medical providers.

Hemophilia of Georgia wanted to accomplish two things. We wanted to honor Trish’s 30-year commitment to the bleeding disorder community, and we wanted to provide an ongoing source of support to develop physicians who specialize in bleeding disorders. How wonderful that both of these goals could happen with the endowment of the Patricia Dominic Fellowship Fund. HoG has forever linked Trish’s name with a fellowship program dedicated to excellence in patient care and research.