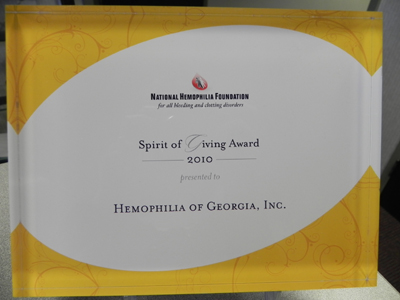 Hemophilia of Georgia recently provided funding to the National Hemophilia Foundation for two new Judith Graham Pool Postdoctoral Research Fellowships.  The new research fellowships will be named for Jim and Janet Glass and for Bill Riley, Jr. in recognition of their many years of service to the Georgia bleeding disorder community.

The four-year research fellowship grants will be awarded in July 2011.  The NHF thanked HoG for this donation with a Spirit of Giving Award.  The organization’s commitment to research is reflected not only in our funding of these Judith Graham Pool fellows but also in our support of three physician-researchers in the U.S.