The General Assembly's Page Program: A Chance for Young People to See Government in Action

By Jeff Cornett, Director of Training, Research and Advocacy 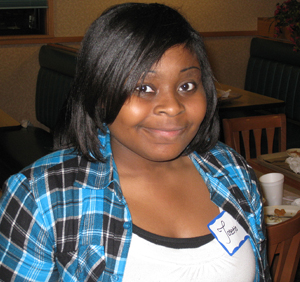 Hemophilia Day 2009 was 16-year-old Josette M's first time seeing the Georgia General Assembly in session. As she waited to talk to her senator, Ronald Ramsey, about the needs of people with bleeding disorders, she noticed the pages carrying messages in and out of the senate chamber. Curious, she asked how the young people were chosen for that role. Senator Ramsey put Josette on the list of potential pages and two weeks later she was called to serve.

The page program at the Georgia General Assembly is a chance for young people 12 and older to see first-hand how state government operates. Pages serve one full day while the legislature is in session. The Senate pages mainly deliver messages and legislative materials to the Senators inside the chamber on the third floor of the State Capitol. There are also pages to serve the House of Representatives.

Josette said her experience as a page was "cool" and that she got to meet "a couple of interesting kids." She was at the State Capitol all day and her lunch was provided by Chick-fil-A. In addition to getting "to see what they actually do in the Senate," Josette received a certificate signed by her senator and Governor Perdue and was paid $10. Josette encourages other young people with bleeding disorders to be pages at the Capitol because it "would be an interesting experience." It is also an opportunity for our elected officials to meet a person with a bleeding disorder and hear his or her story first-hand.

If you are selected to be a page, please let us know so we can share your experience in the newsletter.