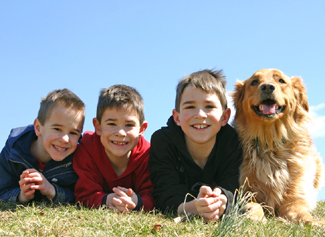 Each of your children needs to know as much about your family’s bleeding disorder as he or she can understand.  Sharing information with your children can mean fewer misunderstandings and less worry.

Unaffected brothers and sisters of children with bleeding disorders often feel ignored by their parents.  The parents seem to give so much more attention to the child with the bleeding disorder.  Brothers and sisters who feel deprived of their parents' love may become angry at the child getting the attention.  Then they feel guilty about being angry.  Sometimes the other children are secretly worried or feel guilty about possibly having caused bruising or bleeding.  If you listen to your other children and explain as much as you can, you can help relieve their worries.

Sisters of boys with hemophilia may be very worried about being hemophilia carriers.  As soon as your daughters are old enough to understand, explain carrier testing and what the results might mean.  Testing and counseling about results should be done before your daughters become sexually active.  Remind them that more is being learned every day about treating hemophilia and that by the time they have children, the picture may be very different.

Rivalry between children is normal in any family.  You can reduce the rivalry by spending time alone with each child.  Spend this time doing something you both enjoy or just talking and listening.  After your child with hemophilia gets factor, you may want to do something with his brothers or sisters.  They may be feeling a little neglected.

If members of your family are having trouble talking with each other and relationships seem strained, the social worker at your HTC may be able to help.  Sometimes it takes someone outside the family to help sort out the problems.

Guidelines for parenting brothers and sisters of children with bleeding disorders