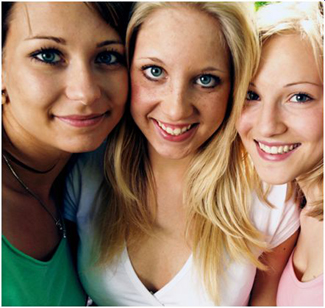 Women of child bearing age have monthly bleeding called menstruation.  It is also called menses or a period.  During menstruation, the lining of the uterus (the womb) is shed along with some blood.  Most women with bleeding disorders have very heavy periods that last longer than normal.  The medical name for this is menorrhagia.

Women who have been diagnosed with a bleeding disorder often dread their monthly periods because of a large amount of bleeding that can occur during this time.  It is not uncommon to have to change a pad/tampon every hour or so for the first day or two of the cycle.  The bleeding can also last longer than a week and interfere with activities of daily living.

It can be embarrassing, annoying, and inconvenient to be bleeding heavily for several days.  Many women fear they will leak through their clothing while in public and choose to stay home for the first day or two of their cycle.  This means missing days of work or school which can create problems with employers or teachers.  Fortunately, there are products available to help control the bleeding and avoid soiling clothing.

In the past, doctors had difficulty defining the normal amount of bleeding that should happen during a woman’s period.  It is hard to measure.  Women in a family with a bleeding disorder may think their periods are normal because they bleed just like their mothers and grandmothers did.  Your doctor may give you a chart to mark how many tampons or pads you use each day of your period.  A normal period lasts less than eight days.

Bleeding during your period is considered heavy if:

How to treat menorrhagia:

Some women with menorrhagia are treated with hormones.  They receive a combination of estrogen and progesterone.  This causes thinning of the lining of the uterus (womb) so that there is less lining to shed during the monthly period.  The longer you take the hormonal medication, the lighter and shorter your period becomes.

There are several forms of hormone medicine.  You and your health care provider can decide which will work the best for you.  Hormones can be taken in a daily pill or as an injection (shot) that is given every three months.  Your health care provider can put a device in your uterus.  This intrauterine device releases a hormone that helps control the bleeding.  It can be left in place for up to five years.

There are several options of pills available.  There are monthly packs so that you have a period once a month.  There are three month packs so you have a period four times a year.  There is a form that you take every day of the year.  With this last option you don’t have a regular period but may have unscheduled and unexpected breakthrough bleeding.  The unexpected bleeding is usually spotting.  The option of unexpected spotting is inconvenient but it may be easier to live with than heavy bleeding.  You know your body and your lifestyle better than anyone else and can choose what option will work for you.

Menorrhagia may also be treated with surgery. One type of surgery that is used is endometrial ablation.  The doctor uses heat, a laser, or radiowaves to remove the lining inside the uterus.  This lining is called the endometrium.  After it is removed, the menstrual flow usually decreases or even stops.  Most women are not able to have children after endometrial ablation.

Removal of the uterus (hysterectomy) will stop menstrual bleeding completely, but it is a drastic step.  Make sure you have discussed all other treatment options with your doctor.

Products are available to help avoid blood leaking through your clothing.  One can be found in the incontinence aisle at most discount and drug stores.  This product is called Poise® Panties and it can be discreetly worn under clothing.  Unlike the common perception of adult diapers, these are thin and worn as panties so there are no sticky tabs at the sides as found in some products.  They are made to absorb a considerable amount of fluid and they are disposable.  They can be worn in addition to a tampon to give you extra security when you are having heavy bleeding.  They do not rustle when you walk or add bulk to your clothing.  The top of the panty can be folded down to fit under low rise pants.  They are a great option for your heavier flow days.  If you have questions or need help locating products to manage your heavy periods, talk to the nurse at your hemophilia treatment center (HTC).

Teenage girls can often be embarrassed by the heavy flow and may not participate in sports or other activities for fear of having an accident.  Physical exercise is an excellent way to overcome menstrual cramps if you suffer from those.  It also improves muscle strength and can keep your heart healthy.  Using super tampons in combination with the Poise® Panties will help prevent accidents while participating in sports or other physical activities.

Sometimes teachers will not allow girls to go to the bathroom as often as they need to when having their periods.  Your bleeding disorder nurse can help educate the teachers by doing an educational in-service at your school.  Once the teachers understand about your bleeding disorder and why you may need to make several trips to the bathroom during the day, they are more likely to excuse you from class to take care of your hygiene needs.

A woman with menorrhagia can lose a great deal of blood each month.  She may become anemic. This means her blood has less than the normal amount of red blood cells.  She can feel weak and tired.  A simple blood test can check for anemia.