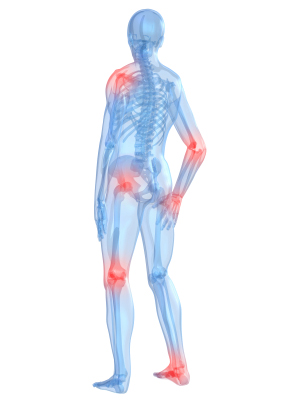 Joint bleeds are bleeding that occurs in the space where two bones meet.  They happen most often in the elbows, knees, and ankles.  Joints in the shoulders, wrists, fingers, hips, and toes can bleed also.  When the joint fills up with blood, the pressure causes pain.  If the bleed is not treated, the joint can be permanently damaged.

Bleeding into a joint is common with hemophilia.  It is rare with VWD and platelet disorders.  Most bleeding disorder doctors believe that joint bleeding only happens in the most severe forms of VWD.  People with Type 2N and especially those with Type 3 VWD are more likely to bleed into their joints.  This is because they have low levels of factor VIII as well as VWF.  People with other types of VWD may have joint bleeding if they receive a hard blow.

Early signs that you are having a joint bleed:

Later signs that there is bleeding in a joint:

Try to treat before these happen!

How to treat a joint bleed:

How to prevent joint bleeds: